Here is where you can take a sneak peek at things you won’t find in the novel The Empire’s Edge. Cut scenes, maps, information on the founding of the Houselands structure--whatever I dig up from background not included in the book. 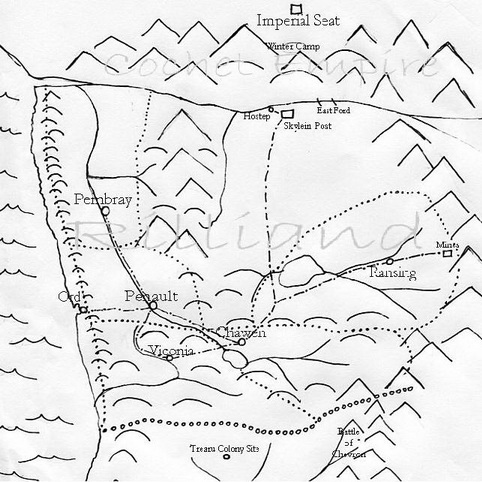 Deleted scenes: Former prologue
Cochet Empire, early autumn
Saato shrugged lower in his fur robe. Winter came earlier every year, and his old bones hurt. Heat no longer reached the imperial throne, no matter how close the brazier sat.
He drew a shallow breath off his pipe. The Nyahm powder burned his throat but soothed the ache in his joints, and loosed his spirit from his frail body. The emperor floated separate from himself, observing the carved and lacquered room screen across from him in minute detail; the way the wood smith had formed glorious flying serpents, the mountain wyrms. The black polished wood glittered in the brazier’s light, the shadows flickering, so that he believed each wyrm in the pattern moved, danced, flew.
Voices in the hallway brought Saato back to his shell. The heavy wooden door swung inward on leather hinges that made no sound. War Leader Temsik stood in the doorway, solid rock in a tide of Saato’s scurrying advisors. After a pause, he entered and approached the dais.
Saato waved away his advisors with a simple gesture. They bowed a retreat out the door. The war leader advanced across the room in sure, even strides. He stopped at the base of the dais below the throne and dropped an exact bow, low enough to show respect but without his glittering black eyes leaving Saato’s. His black silk surcoat swallowed the light so that the embroidered wyrm seemed to float on his chest, gleaming wings carrying the serpent upward to the heavens.
Temsik’s deep rumbling voice menaced the air between them, and as always he spoke before gaining permission.
“My Emperor, we must move ahead. The southlanders are weak on the border. Now is the time to take back the mountains.”
“War Leader, I am still uncertain.” The emperor watched Temsik lower himself into proper seated position on the scarlet silk floor cushion. “The Rilliands—”
“Have no regard for our most sacred ways. It has taken fifty years to re-build our own population, re-build our armies. In that time, the wyrms have all but disappeared from our empire. The southlanders burrow in the only sure deposits of guano left. They mine for ore in the home of Sylphanon’s children. Every year, fewer wyrms return north.”
Saato coughed; a dry hack familiar to his sore chest muscles. “My advisors tell me the breeding program goes well.”
“Captive wyrms. Caged beauties in chains! Domesticated, they are weak. The guano is weak, the Nyahm will be weak.”
“The mushrooms would not grow upon bad soil.”
The graying warrior looked Saato in the eye as no other advisor dared. “Sylphanon demands his children fill the sky. Nyahm needs the wild wyrms’ fertilizer to be holy and pure.”
Insolent pup. Of late, Saato had thought to pass the reins of the empire to one of his advisors; he had no living children. Temsik stood out, presented himself to one’s notice better than the others did. Yet Saato held niggling doubt he would be the proper choice. He fought to drag reason up between his aching ribs and out of his dry old skull, to refute Temsik’s argument. He could not. “You are too young to remember the bloody battles fought. The Rilliands are too strong.”
“I was six, my emperor, I remember the defeat.”
Temsik’s bitter look reminded Saato the man before him held deep-seated passions for the empire; passions he himself had given up with the retreat five decades before.
“I am too tired to pick up the battle again, War Leader. I will be with Sylphanon soon. I wish to leave our borders at peace.”
His often-fervent war leader pounced on the words, his tone reasonable. “Then, as you love Sylphanon, we must make your final act protection of his children in this world. Allow me to take your warriors straight to the Iron Mountains to collect the guano that is ours by divine right. The southlanders have no use for it. The guano is in the way of their ore.”
Saato coughed again and took another puff on his pipe. Temsik seemed to speak sense. Yes, they should save the wyrms from dying out. Of course, the caves were theirs. The Nyahm reached his bloodstream again, and Saato imagined wings in place of his arms. In his mind, he leapt into the air and rode the wind that swept the steppes outside, the way the mountain wyrms did so long ago.
Temsik’s voice cut in. “Send your warriors, Emperor.”
“Yes,” Saato blinked at the interruption. “You may be right. We should send word to the Rilliand Crown to let us in to the mines—”
“No! Your Highness, that would be an invitation to destroy our culture completely!” Temsik made a chopping gesture in the air. “Fifty years ago you withdrew our warriors from the border to save our people. We had too few men left.” Temsik leaned forward. “Now is the time to send our warriors back, across the river and into the mountains, to save the children of Sylphanon.”
Saato wasn’t sure Temsik’s way would retain their culture; still, he remembered when he was a boy the children of Sylphanon flew overhead all summer long. The slender legless dragons were a sign of abundance, fertility, and their god’s favor to the Cochet people. Now, to see one at all meant luck. In the past, the northern portion of Rilliand had been barren wilderness beyond the patrolled border. Perhaps any conflict would be minimal.
“If you think that would be best.” Saato coughed again, and took another puff off his pipe. “Yes, then. For Sylphanon’s children. Take the Iron Mountain caves, War Leader. Save the breeding grounds.”

Deleted scenes: Temsik recruites his nephew, Chuan
Chuan stopped packing and crept to the crack alongside the sleeping-alcove door-hide, ever wary of his uncle, and listened. Temsik loomed over Chuan’s grandmother, the low ceiling of the hut emphasizing the bulk of the man’s armor. “Every able-bodied soldier, Nurimi.”
Nurimi held her wooden spoon as a weapon, ready to strike her elder brother, her face set in worried lines. “He is a child.”
“You were a babe at suck when Father died. You didn’t see what the southlanders did—”
From her corner, elderly auntie Tatami clucked. “Your father hanged himself, boy, and it’s cut the blood to your brain ever since.”
“Quiet, hag! The emperor named me Wing of Sylphanon. Defy me and you defy our god.”
Tatami raised a finger, plucking the air at the war Leader. “Your charge is to save the dragons, not take as many southlanders from this life as you can.”
Temsik turned back to Nurimi. “Chuan will be sub leader. I offer him safety with command status. You cannot deny him his duty to Sylphanon.”
“I have watched you in your duty, brother.” Slapping the wooden spoon back on its holder by the fire, she re-tied her silver hair with furious, jerky motions. “Very well. I send Chuan with you to be the good influence you need.”
Temsik stepped back. “We leave directly. Send him out.” A blast of cold followed in his wake as he left the sod-sided lodge. Chuan emerged from the sleeping room.
Nurimi looked at him. Her face softened from frown to worried crinkles. “Would that your father was here as well. I trust your instincts, as much as I don’t trust your uncle’s.”
Chuan stole a taste of the stew cooking over the fire. “I can hold my own, grandmother.”
“Even so.” She fussed over him, making sure his satchel was tied properly, tugging his long, black braid from under the shoulder strap. “He has a vendetta. The southlanders have left us in peace for two generations. Your uncle trusts you. He may listen to you. Keep him on the true path.”
Chuan searched her kind brown eyes. “And if I cannot?”
Nurimi’s mouth hardened in a line. “The children of Sylphanon must survive. In that, he is right. But our culture’s survival will take the cooperation of the southlanders, not their slaughter. You’re a man now. Walk with courage and thought for others.”
Briefly, he clasped her in a hug. Waving a farewell to Auntie Tatami, he left the lodge of his boyhood.
Home
Subscribe to: Posts (Atom)