Here's a silly freebie: the map to the conflict referred to offstage in The Empire's Edge. 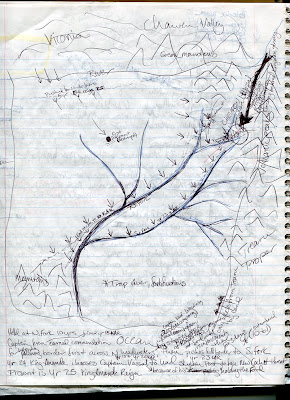 The battle over land in Trearu, to the south of the kingdom of Rilliand, has stretched back for 30 years at the beginning of EE. Captain Jeren Vassal, our hero, has spent the majority of his 10-year military career fighting over turf in Trearu for his kingdom. The black arrow to the right indicates where two years prior to EE, he made his big mark on history; he led 200 men in holding back an ambush by 2,000 Trearan warriors descending unexpectedly from the mountain passes down a ravine. Victorious (but losing his commander and many other good men), Jeren was awarded a medal by the queen of Rilliand. This is known as the Battle of Chevron.


Sometimes, getting noticed and gaining a reputation for excellence (when reality was coincidence of right place/right time) can work against a man...
Newer Post Older Post Home