Someone has proven herself responsible enough to satisfy us she's ready to own a guinea pig, so we promised that would be this year's birthday gift.
I planned on getting the cage, food, hay, treats, etc. for the birthday one week hence and pick up the critter after we return from Nate's wedding, after Memorial Day.
Curse you, Craigslist.
Last night we were only going to go view the advertised babies and pay for one to reserve it.
Instead we bought, brought home and installed the cutest little fluffball to cross my threshold since Homer was a baby. Kidlet toyed with a variety of names, including "Chocolate Chip" and "Cookie" before settling on "Princess." 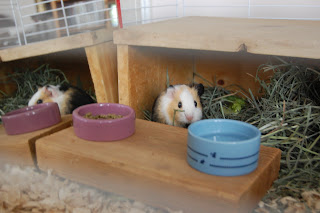 For size comparison, I chased her out of her hidey-hole in her garage (which used to be Homer's) and placed both a baseball and whiffle ball in the cage. Both are standard-size. She's soooo little! Five weeks-ish old; she'll get much bigger, of course. 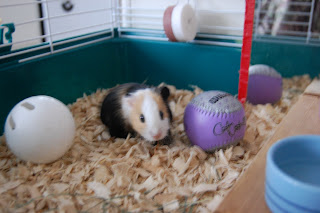 Why didn't you use Homer's old cage, you ask? We pulled it down from the attic but the galvanized steel base had not weathered the years in the attic well and was all corroded. Ew. I wanted a plastic-based cage anyway for ease of cleaning. Much easier to sterilize.

I tell you, waking up to "whoot whoot whoot wheee wheeee wheeeeeee" was wonderful! And her kibble smells so good, like sunlight in a barn, and her hay...ah. As Hubby says, "Smells like home!"

Shadow is VERRRY curious and at this point wants to see what that little squirrel-like thing is and maybe how it tastes...we've warned Kidlet that Princess needs to stay in her cage for the first few days until she is comfortable with us. Homer hid for two days straight, if I recall, before he warmed up to us, and he didn't have a dog staring at him.