Two offerings today, the second of our snow closures for this week. Temps this morning reached 10 degrees--very unusual for our temparate region. Our Rinnai had little usefulness as the pipes leading to and from it froze. Thank goodness they didn't burst. My resourceful hubby set the parabolic space heater in front of it for half an hour and the hot water returned. Hooray! Yes, the pipes are insulated; apparently not well enough for 10 degree weather. I'm off to Jerry's to find more/better insulation.

The sun is out, which should melt the rest of yesterday's ice off the pavement on most roads. We're supposed to get massive amounts of snow tomorrow, so we'll see. 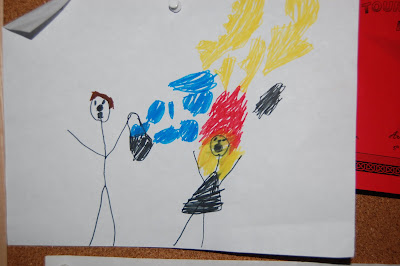 She says these two are husband and wife.


And this year's gingerbread house. This is the fifth house she and I have made together. I confess I did most of the work this year, as she handed me a photo she snipped from Good Housekeeping and said, "Let's make this one this year, Mommy." I did my best to imitate it, making up the pattern out of cardboard, rolling and baking the pieces, frosting and candy-ing it to match fairly close. You can't see in this photo, but the chimney bricks are little pieces of Bubble Tape. The random candies stuck about are Kidlet's contribution. 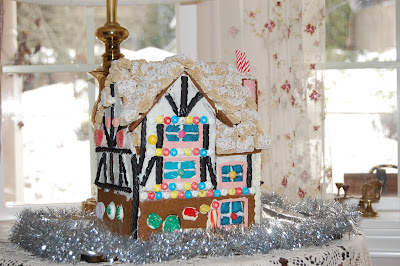 I think it turned out well. You can't see the Necco-wafer walkway leading to the front door, hidden behind the silver garland in this photo. Smells wonderful, too.


The first house we made, when Kidlet was two, Shadow ate while we were out to dinner. No, didn't make the dog sick; but his burps smelled HORRIBLE for a week. Houses have been carefully guarded behind the baby-gate fence since then.