I know, I got home a week ago. It’s taken a while to get caught up.

Nationals was fun. And huge. Ginormous. Tons of information, loads of free books (I brought back a fraction of what was available to the tune of $136-worth, all signed by the authors), scads of bookmarks/keychains/pens/postcards, and 2,000 other authors. Editors and agents were there too, somewhere, but they proved elusive outside the workshops. Can’t say I blame them for remaining scarce—romance writers and readers are an intimidating lot en masse.

You would not believe the size of that ballroom. And it was two stories underground, accessed by a series of down escalators.

The included food was better than your average banquet chicken; continental breakfasts proved yummy as well, if lacking in protein. The San Francisco Mariott has a fantastic locale in downtown, easy walking distance to myriad excellent restaurants, upscale shopping, and Chinatown. BART, on the same block, would take you anywhere else in the Bay Area. 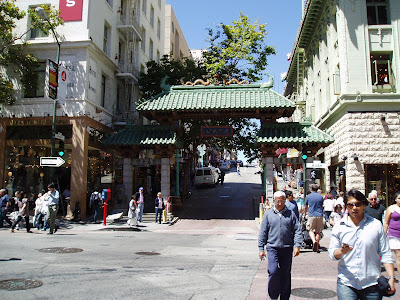 And best of all was the presence of my critique partners and the fact that we got—yes—adjoining rooms, so by keeping the doors open during the day both rooms felt bigger.

Thank heaven for text messaging—that innovation made catching up to each other for luncheons and dinners easy.

You know how you get home and you look at your camera and find you didn’t take nearly as many photos as you thought you had? Photo sharing via the internet is another great thing. Between the four of us we captured enough of each other on film. 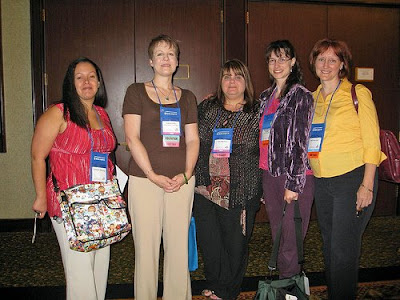 The RITA awards soaked up the final night of the conference. A night to pretend we walk the red carpet. My crit partners posed for this lovely shot: 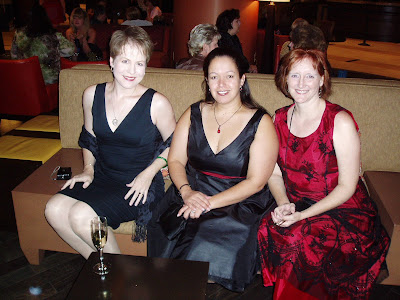 Carrie turned her camera on me. Check out the outfit. The bartender did. Seriously. He came out from behind the bar to tell me he thought I was the best-dressed woman in the room. That’ll make a girl blush. 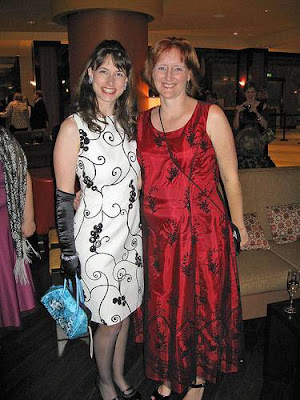 PHOTO: Me in 60’s Mod outfit, with Patti

Our luncheon and award ceremony speakers had amusing tales and good advice. Mostly what I heard in workshops was all good advice; some I’m already doing on my own, other things I plan to apply to my writing career. Overall, the “career” workshops were more useful than the “craft” workshops, which shows how much my craft abilities have grown.

I did speak with one editor (with Bantam Dell) directly but for only a few seconds, long enough for her to smile politely and request I send a query, which I did on Friday 08/08/08. Auspicious date; wish me luck.

I also met Jade Lee , Suzanne Brockman, Shana Abé, Evie Byrne, Bettie Sharpe, Meredith Duran, Susanne Saville, and goggled at how many people Carrie knows. Ate wonderful food, drank too much, stayed up too late three of four nights, giggled lots with my friends, and refreshed my belief in my own writing abilities and career.

And it’s good to be home.