We're on our second day of cancelled school. Those of you in Wisconsin won't be impressed, but the Valley hasn't had this much snow since 1989. Yesterday morning I measured it at 7 inches. Today it has melted mostly into piles of mush, but school was still delayed, and cancelled for kindergarten. Here's our "sled dog" playing in it. 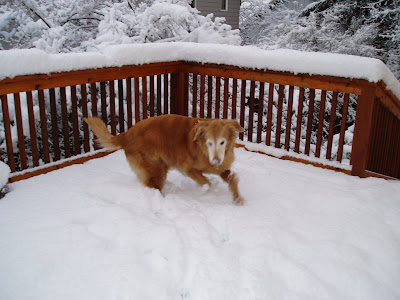 Stupid dog likes to burrow in the snow, eat snow, rub his head in the snow...consequently he now has a severe ear itch which I pray will not turn into an infection because our regular vet can't see him until tomorrow and I neither want to pony up emergency vet fees nor do I wish to drive in the muck. Not because I can't--living in Central Oregon was good training for snowy driving--but because very few "flatlanders" have a clue how to drive in snow. People here have street tires, don't know how to work their 4-wheel-drives, and are so afraid of sliding that they lock their brakes and...slide. I'd rather not drive after dark.