Hello again--time to announce something new. My newest short story, "I'll Always Hear You," available from Alban Lake Publishing's quarterly magazine Disturbed Digest, December 2016 issue HERE started as my one and only NaNoWriMo project a couple years ago. It took more than a year to finish polishing it and send it out, but I was more than pleased that the first place I sent it to bought it!

Some background to help your enjoyment of this story and explain how it is personal to me:

The name of the lingering visitor is derived from my family. My grandmother's older sister died of pneumonia (That was the explanation at the time; Grandma says there was some confusion about the actual cause of death) when she was a little girl, but older than the Arlene in my story. My great grandparents were Harley and Hazel Bates. The alliteration of their first names never occurred to me until I was naming characters in this story (45 years and this NEVER clicked?) and I decided that would be too precious, so I changed the wife's name to my other great-grandmother, Sarah. I chose Baker instead of Bates just to emphasize to family who may read the story that this is fiction.

The house I pictured when writing was the Victorian lady my friend and her husband lived in when they were first married, in Oregon City. She and I had been close friends since we were 11 years old, and we roomed together in college. I was fascinated by the old house they bought, its steep narrow stairs and turn of the century room layout. After their first baby they decided they'd had enough of that and sold it for a more modern construction home, but it stuck in my imagination.

Due to word count limitations for submission, I had to cut a scene I liked that involved a picture my mother used to draw in the steam on the bathroom mirror when I was little. A circle for a head, triangle hat, splayed fingers made loopy hair around the sides, then add eyes, nose, mouth--a clown smiling from the mirror. Since in the story the bathroom is on the opposite side of the wall from Arlene's room, I had my narrator draw this in the steam and it made facial expressions at her. I decided it didn't further the plot so could be cut for space.

Check out my latest short story and the other stories, poems and art to be found. They specialize in spooky, not gory--light horror and dark fantasy. If you enjoy it, let me know! 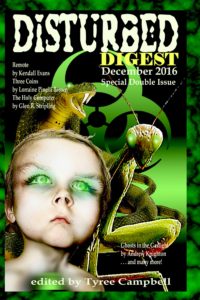 Oh--and the husband's name, Jence, was a random choice. I didn't start watching Supernatural on Netflix until after this story was accepted for publication, so while I am a Jensen Ackles fan now, he in no way influenced the naming of the narrator's husband.