How many people can say they know an astronaut personally? 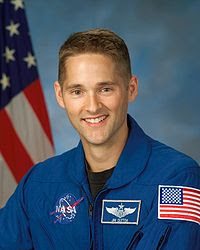 The Space Shuttle Discovery - mission STS-131 will be piloted by a man my brother was good friends with in high school. Granted, I have never had a 1-on-1 conversation with Lt. Col. James P. Dutton Jr., even while he was shooting hoops at my house, and he and my brother have lost touch over the past 20 years, but I can say I knew him when. And I can be excited that he is realizing his dream of going to space as an astronaut. He has worked hard since 1982 to make his chips fall in a row--and they have. Good for you, Jim! His dedication to a goal is phenomenal and inspirational.

From an article in The (Eugene) Register Guard, May, 2004, on the day he was officially accepted into the space program at NASA:

Once upon a time in 1982, little Jimmy Dutton asked Cal Young Middle School librarian Linda Ague for some help on his Career Day project: How do you become an astronaut?

Ague responded by helping the seventh-grader draft a letter to NASA. The space agency mailed back a pamphlet on the best ways to realize his goal - and Jimmy Dutton never looked back.

If every student was like little Jimmy Dutton, "people would be fighting to become teachers," Ague said. "He could have been an arrogant kid, but he wasn't. He was just perfect in every way."

As if to prove her point, Dutton called Ague at Cal Young last week to tell her his exciting news - and then swore her to secrecy, since the official announcement was top secret until today. That proved a tad challenging after co-workers wanted an explanation for Ague's shrieks of joy.

"I went crazy," she said. "I mean, no one calls a teacher to tell them things like that, and to tell them they made a difference. To get a call like that is such a thrill.

"If he ever gets on a mission, I'll fly to wherever he takes off to see him go out into space," she said. "I can't wait. It's too cool."

For the full article go HERE.

I was unable to embed our local news' video feature story which ran February 10, about the upcoming launch, but go to our local news agency KEZI.com for all the updates and to follow the mission.
Newer Post Older Post Home