I've been working on a new flowerbed in the front yard since April of this year. Up to this point--for the past six years--this part of the yard has been grass I don't like to mow. Not only did I remove turf grass, clods of clay dirt, rearrange brick edging but I added a dry streambed with 1/2 cubic yard of river rock I shoveled by hand, new dirt and plants (a lovely-smelling tea rose, a deciduous azalea that matches the paint color of the house, several snapdragons, and veggies). I have before pictures, during pictures. I hadn't yet snapped any "after" pictures because I was waiting for the snapdragons to bloom...This is the sight that greeted me at 11am last Friday: 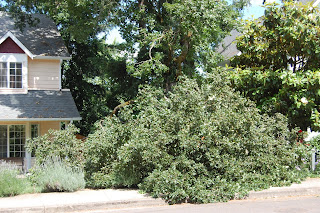 The branch that fell was over 100 years old, according to the ring count. At its base, it was as big around as my waist. So imagine several hundred pounds of solid white oak, crashing where gravity tells it to. Some plants were crushed. One shrub lost half its height but is otherwise fine and my lavendars are kinda ugly at the moment, but they should recover. My new rosebush miraculously survived this fallen branch and another rotten limb above it that was felled on purpose later that afternoon by the contractor we had help us. The azalea of perfect color--that I could only pick in May when it was in bloom--survived the first branch but not the second. Hubby saved some cuttings for me and hopes they will root. The root of the azalea is still in the ground and has one pathetic leaf bunch on it; the plant may survive. We'll see. I'm glad only plants got squashed and not children or dogs, since this happened between 8 and 11 in the morning. 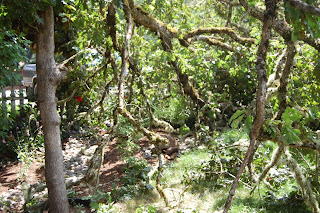 The lettuce and most of the carrots died in the process of cleanup from being stepped on and the contractor unwittingly dismantled my oak-twig gnome house at the base of the fir tree.

My new garden will be pretty again, but for now it's covered in oak-chip sawdust. Some good news is there will be far fewer leaves to rake in the fall from now on, and the whole yard gets more sun and can utilize more water.

Why couldn't this branch (obviously rotten inside) have fallen any time prior to April?