Yes, as a matter of fact, I am enjoying a silent house six hours a day.
Within that, I am attempting to write my next novel, an adventure centered on a herd of African elephants. Think Watership Down or Black Beauty. In my first three days, I have accomplished 1,000 new words and loads of research. Did you know that in the miombo woodlands of eastern Tanzania, the trees fruit during the dry season of October to December? I spent half an hour looking that up, as I had to know what was available to eat in March that the elephants would like...mostly grass, it turns out, at the beginning of the long rainy season.
The average rainfall in that area is similar to the average annual rainfall right where I live--55 inches per year, and our average high/low temperatures bracket what is found in that region by ten degrees on either side.
A while back, I posted a photo of our little attempt at a corn patch. Here are the results of the maturing corn, average height three feet... 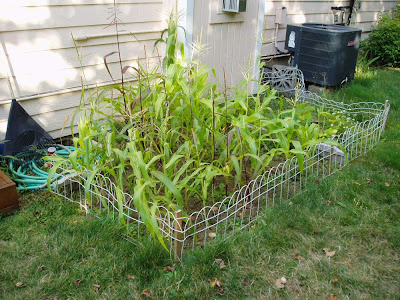 We have three theories as to the poor production. My theory is not enough sun. As you can see in the photo, the corn is in shade, in spite of that being the sunniest spot in the backyard. Kidlet's theory is not enough water, which is a valid point. Hubby's theory is poor soil, though I did amend it in spring with compost mulch, we will be adding more over this winter. Most likely a combination of all three factored in to make miniature corn. It will all make wonderful decorations for Halloween.